Skip to content
19Jul 2019 by The Mahojos No Comments

Ugh, we’ve been back from France for 5 days and it feels like a lifetime! One thing we’re missing is following Le Tour de France. If you’ve been thinking about going over to France to catch some stages, here are our 5 top reasons to go…

The route for Le Tour is different every year. In the two times we’ve followed Le Tour, we’ve seen two stages in the French Alps and two in north Eastern France. We’ve wild camped at the side of the road near beautiful little towns and villages, meaning that we’re exploring parts of France that we’d never normally see.

About two hours before all the riders sweep past, the sponsors ‘caravan’ speeds by which is a sight to behold. Creative vehicles advertising the sponsors brands, throw freebies at the spectators lining the route. It’s a great opportunity to grab some Le Tour-themed goodies such as t-shirts, key rings and various other bits and bobs.

There is such a fantastic atmosphere along the routes, and it’s a great opportunity to meet people not only from France, but from other countries too. This time around we met a lovely Belgian-German couple who kindly gave us a couple of t-shirts and some top tips on dog-friendly beaches in Belgium. Last year we met an adorable French couple who we shared a lay-by with in one of the mountain stages.

So close you can almost touch the cyclists!

Okay so not that you actually would reach out and stroke Geraint Thomas as he whizzes past…but you are soooo close! The riders are literally inches away from you as you stand at the side of the road to cheer them on. If you pick a mountain stage then you actually get to see them for more than a millisecond on a flat route at their top speed. 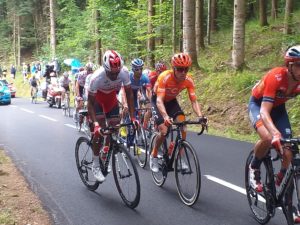 When we’re all set up in our little camping spot the night before the stage, it’s so relaxing. We’ve normally got a little BBQ on the go with a couple of beers as we chill out and enjoy the countryside. The following day the excitement quickly builds as we wait for the caravan to whizz past. Then there’s a little gap, time for a couple of brews, before you hear the distintive whir of the television helicopters. Before you know it, you hear other spectators hollering and cheering down the road as the riders approach your spot. Excitement and relaxation in equal measure, and highly recommended.